How To Feel About Joe’s Promotion 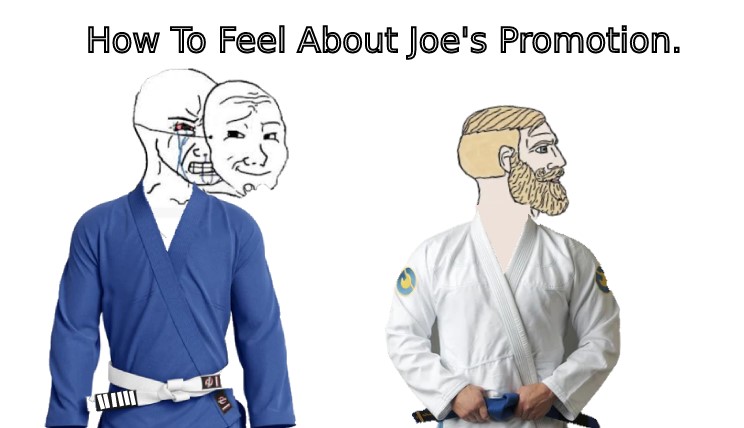 The last round timer sounds and you are awash in the victorious high of another session of smash and grind. Another Day Porrada! What could possibly overshadow this post-coital glow of grappling ecstasy…?!

Just then Coach strides to the middle of the mats with a twinkle in his eye and a mysterious bundle tucked in his gi. The upper belts nod knowingly as a reverent hush falls over the room.

As Coach waxes on about the importance of character (check), consistency (check), and progress (double check), a tingle hits your nethers and a glimmer of hope rises in your chest. You know who he’s talking about!

It’s so obvious! I mean, it’s a little overdue if you think about it. Honestly, you’re not sure why Coach didn’t promote you last weekend on the podium at NAGA when you won your two-man bracket by an advantage. But, hey, better late than never…

Take a humble, stoic a posture and stare off into the distance as if despite all the suffering and unfairness in the world, this… this small moment… is destiny. The speech comes to a crescendo with a pregnant pause. You shift to get to your knees, ready to claim this well-deserved glory.

WAIT A MINUTE…! YOUR NAME’S NOT JOE…! WHAT IS EVEN HAPPENING RIGHT NOW?! JOE…?! ARE YOU KIDDING…?!

Ok, ok, keep your cool. This is LITERALLY INSANE but you’re going to get through it. Now is not the time to go all Kanye up in here. Clap. Give Joe a hug. Go on, do it. Tell him congrats. “Oss” *slap *bump *shacka. Now grab your gear and get to your car before those tears start rolling.

While you scream obscenities into your pillow tonight, let me help you make sense of this miscarriage of justice. What does it all mean!?

First of all, forget about what you read in Rener’s Instagram post. It absolutely IS about the belt! How else are you going to get your neighbor to shut up about little Tanner breaking a board at Tae Kwon Do?! NEWS FLASH, Kathy! Boards can’t choke you out! It’s easy to say “iTs AlL aBoUt ThE JoUrNeY” when you’ve been a black belt for a few decades. Let’s be honest, what good is knowing this stuff unless people KNOW you know it?!

Seriously, though, it’s all politics. If you worked at a used car dealership like Joe, you totally would have gotten Coach a deal on a mini-van too! Jeeze, what a suck up! You tried to get Coach in on the ground floor of your mulit-level marketing venture but he was “super busy” at the time. It’s too bad though… he could have made a killing with all his contacts at the gym. Those prepaid phonecards sell themselves! Also, Super weird that Coach didn’t like your last FB story the other day, right?

Who friggin cares that Joe trains more than you do?! Following Nickelback on tour took up a lot of your year. And then there was the three months you were banned from training for making the females in the gym feel “uNcoMfOrTaBle”… But let’s not forget that you started like 3 whole weeks before Joe! Maybe Coach didn’t remember? Or something went wrong with Zen Planner? Whatever…

Look, it’s not that you don’t like Joe. He’s a good dude. You’re just not sure if he’s “ready.” Kinda lame that coach didn’t ask you about it first, but what’s done is done. Now that you’ve swallowed that bitter pill, here’s the good news: Joe’s promotion says way more about you and your training that it does about his. How could it not?!

You used to submit him ALL THE TIME, right? But now for whatever reason he just doesn’t want to roll with you. Maybe it’s because you dig your elbows in to his thighs to break open closed guard. Or was it that time you poked him in eye when he caught you in a triangle? Nah, probably that time you cranked his ankle that was all taped up. What a baby… Regardless, you totally beat him. So, by the transitive principle of Jiu Jitsu, any tap of his is your tap too. That means you earn that belt just as much as he did. To make it official, go ahead and put another piece of tape on your belt tonight. A seven-stripe white belt is basically the same as a two-stripe blue, right?

Just keep doing you, champ. Talk as much trash as possible about Joe getting promoted. It’s literally the best way to earn credibility. Continue wrecking those casuals coming in for their trial class. Who cares if they don’t come back? By the way, your can-opener pass is getting really good. Maybe you just need to just crank it up a notch, though. It might be time to hit up Rico about another cycle. Giddy Up!

In short, give it a few more weeks. And if Coach doesn’t come to his senses, just move to that gym across town. I hear they don’t do warm ups or make you mop the mats.