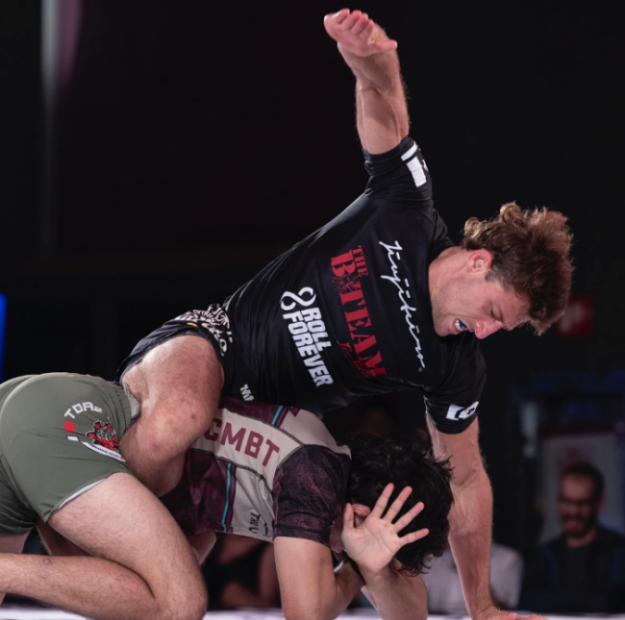 The International Brazilian Jiu-Jitsu Federation (IBJJF) and ADCC can’t seem to stay away from the slapping action. Two of the largest and most popular jiu-jitsu promotions are venturing into the world of open hand slapping during competition. The evolved form of jiu-jitsu is being embraced by the entire community after years of hesitation and mockery of its founding father, Master Eddie Bravo. This revolutionary form of BJJ allows opponents to strike each other with open palms during the match. This exciting addition creates a more realistic fighting aspect to the submission grappling focused martial art.

This past weekend, the IBJJF decided to get into the open hand action. Sparks were flying in a heated black belt match when jiu-jitsu jerk Muslim Patsarigov faced off against Oliver Taza at the European NoGi IBJJF Championships. Upset for consistently sucking at jiu-jitsu, Mulsim flipped off Taza and then open hand slapped him. Before Taza could retaliate, Muslim stomped off the mats, kicked over promo signs and pouted like a 4 year old that didn’t get a papanași.

Back in 2017, Muslim participated in an experimental Slap-Jitsu match with the IBJJF at the same tournament. Muslim faced off against “Florida Boy” AJ Agazam, slapping AJ to the ground and then immediately threw a temper tantrum (his thing). No one really cared since AJ was involved.

Dan Manasoiu of New Wave Jiu-Jitsu, has challenged Muslim to a match following the most recent slap scandal with Taza. Dan, who easily crushed Muslim earlier this year in their own match, is calling for each to put up $10,000 of their own money for a winners-take-all match. However, Muslim, being frightened of the Jiu-Jitsu Giant, is reportedly hiding in Romania with his MMA instructor.

The ADCC jumped in the fun this past October, hosting a special Slap-Jitsu Superfight match featuring André Galvão vs Gordon Ryan. An anxious André was able to get a clean five finger slap across Gordon’s right cheek early on. To avoid further facial damage, Gordon sat down and executed a beautiful sweep, eventually taking André’s back and locking in strangulation victory.

Not surprisingly, André attacked with hand strikes first instead of his inferior grappling at the much anticipated Superfight. This was likely in retaliation to the infamous double slap combo that Gordon gave André in an impromptu street match late last year.

Eddie Bravo, who remains on the cutting edge of jiu-jitsu and science, predicted this evolution of the martial art years ago. The visionary has brought us some of the most spectacular slapping around with his own promotion, Combat Jiu-Jitsu. Often referred to as the Renaissance Man of Jiu-Jitsu, Eddie also predicted the popularity of NoGi back in the days when gi jiu-jitsu still existed.

What’s next for Jiu-Jitsu? What’s next for Flat Earth’s non-gravitational aliment dimensional symmetry? One would be foolish not to ask Master Bravo for his predictions.