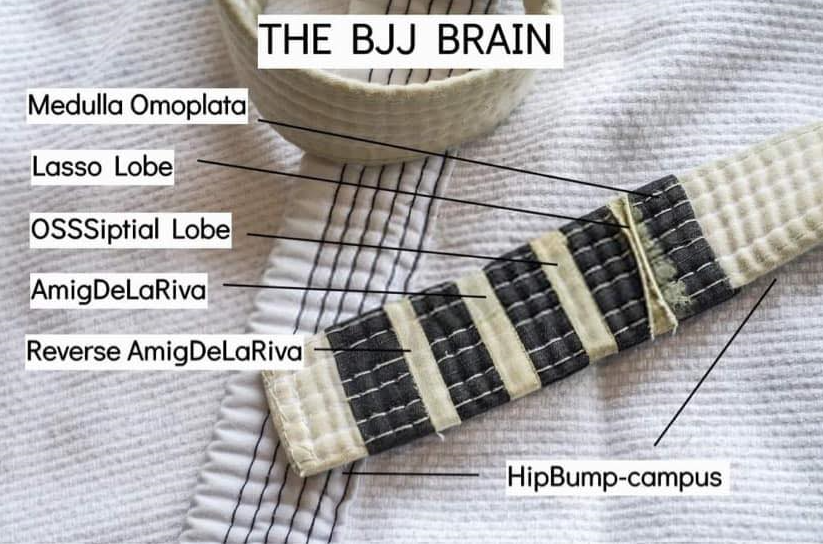 Shocking news out of North Carolina as Charlotte resident and 4-Stripe White Belt, Tom Denubie, has irreversibly lost his entire knowledge of Brazilian Jiu Jitsu. It is reported that after arriving home from a hard night of training, Mr. Denubie, was watching technique reels on Instagram, when Jennifer, his wife 6 years, called out to him, “Do you need anything washed?! I’m about to start a load.” “Just my Gi!” was Tom’s reply from the upstairs bathroom.

An hour later, a buzzer sounded through the house that would change everything. As Jennifer lifted the lid to their Maytag High Efficiency-Top Load Washer, she saw to her horror that Tom’s Jiu Jitsu belt lay atop the tangle of clean, damp clothes with one solitary strip of white tape barely clinging to the grading bar. Carefully, Jennifer tried to remove the belt from the machine, but the promotion stripe could not be saved.

With a heavy heart, Jennifer cradled the belt in her arms and proceeded upstairs to give Tom the difficult news. She found Tom on the upstairs commode staring at his phone visibly disoriented and confused. Startled by the partner he no-longer knew, Tom fled the home in a panic not to be found until 3 days later, rummaging through a neighbor’s trash cans.

Though Tom was rushed to a nearby hospital, there was little that could be done to reverse the damage. Medical staff performed a battery of test to assess just how much harm had been done. When asked to simply shrimp or stand up in base, Tom stared blankly as if those words no longer had any meaning. Hardest hit by these events were Tom’s children whose names and faces he will never recognize again.

“It’s well-known that this kind of neurological damage can occur with repeated concussions or prolonged asphyxiation.” said Dr. Nei Yonbelli, Memory Care Director at Carolina Medical Center, “But there’s far too little awareness of protecting the memory receptors located in the thin strips of athletic tape wrapped around the BJJ belt. In fact, the belt, itself, is primarily responsible for converting short-term into long-term memory.” Many thanks to Dr. Nei Yonbelli for providing the diagram above.

We reached out to Sensei John Piper, Tom’s BJJ coach, who upon hearing the heartbreaking news had this to say, “Tom was a great student, one of those rare athletes that could replicate the moves after only seeing them once or twice. His first day at the gym he was hitting Crucifix entries perfectly on like the third rep. Dang… I was just about to give him his Blue Belt at open mat this weekend.”

When asked why someone would ever wash their BJJ belt, Sensei Piper replied, “Granted, ring worm, staph, Streptococcus, MRSA, and other pathogenic bacteria can propagate like crazy in unwashed gear, ESPECIALLY in warm climates, and the smell is awful… But is it really worth it!? It’s a shame that so much growth and talent can be lost in an instant.”

Tom is now recovering at a No Gi Jiu Jitsu rehab facility that focuses on helping grapplers to be less clothing dependent. His goal is to book speaking engagements and travel to academies across the country to warn players about the dangers of washing their belts in hopes that this never happens to anyone again.

UPDATE: Since the writing of this story Tom has sold the movie rights to his experience. Casting is set, and production starts this fall for Memento 2: Washed Out.

Do you wash your belt?! Why or why not? Let us know below!